With Dual Pouch technology, each part of your anatomy has its own space. The support pouch provides an independent lift for your scrotum while the front pouch provides enough space for your penis. No more stickiness, no more readjusting. You’ll feel cool and fresh after trying them.

Learn How it works

Such a great product. My package doesn’t shift and move around like it does in other underwear. Thanks so much!!

I was so excited to put these on!! When they arrived I ripped open the package in the kitchen and stripped down to nothing. Ripped the tag off with my teeth and threw it like a Grenade pin. Once I stuffed my “unit” through the hole and let my balls relax on the hammock I felt nothing besides pure satisfaction. I need to order more of these so I can replace my old cotton “basic” boxer briefs. These are next level and completely worth the price tag. Do your Dick’n Balls a favor and get you some!!!

Since losing 30 lbs, I decided to order a new set in Mediums rather than Large. OMG...It was like I was discovering Separatec for the first time. I was excited, stimulated and supported the whole entire Day.. Thanks Guys!!! 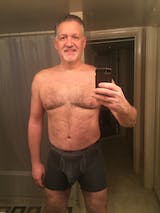 I have literally spent most of my adult life searching for the perfect pair of men's underwear. I've tried them all and have spent copious amounts of money in doing so. Rarely have I been "wowed", not to mention the times I've worn a new pair one time and ended up either throwing them in the trash or giving them to a buddy after being washed. Most of said underwear came at a cost of over $30 EACH and to call them mediocre would be accurate. That being said, I was skeptical on purchasing these. Boy, I'm glad I did. The design is a little strange feeling at first. The front flap/fly design defies all logic and is pretty damn awesome, I must admit. The designated pouch for your balls also works exactly as it should creating a very comfortable experience. I normally take a size M, but after reading reviews I decided to go with the S due to being on the lower side of the M scale. They're a little snug, but not restricting at all. That's the best thing about these. Even tho they're snug on my body, they don't smash down my junk. Penis fits nicely through the front hole into it's own non restricting compartment. No contact with the balls at all. It's just a great design and very comfortable. I'm anxious to try some of their other designs/fabrics. Another positive is that you don't have to be embarrassed in the gym locker room because they look like normal underwear from the outside. No embarrassing suggestive names in huge block letter on the waist band like some of my previous purchases. Last thing I have to say is, at $36 for a 3 pack, it's one hell of a bargain compared to what I'm used to spending. Take it from someone who has painfully tried them all. Take the plunge, you won't regret it. I am calling these my new favorite underwear.

So, so thankful that you gave us this amazing review, David! This is music to our ears! Stoked to hear you're enjoying everything. Happy to have you on board!

We know it's hard for you to experience our innovative product without trying it on. For that reason, we've created our "100% satisfactory" Guarantee.
If you're uncomfortable with your first box of Separatec*, you can keep it. Just let us know whether you'd like a refund(excluding delivery charges) or an exchange.

* Please note the few conditions on this offer: