I’ve reached out twice no acceptable response obviously a fly by night company. I don’t recommend throwing away your money here.

B
B.
Awesome once you get used to position

Obviously your junk sits differently but once you get used to it ,they are the most comfortable things I've ever worn . definitely recommend them. Just wish they were cheaper than 40 bucks for 3 . 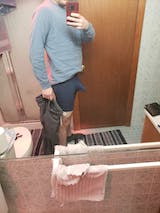 I bought a 3pk of the micro-model boxer briefs and I am beyond ecstatic at how amazing these underwear are! Seriously, I’ll never go back to normal underwear again. When I first got them, I had to keep looking down because they’re so light and cool that I needed to reassure myself that I was indeed wearing underwear. I’ve never wore underwear that felt so cool, it’s game changing!
As far as the hole that separates the “frank” from “the beans”, (which is the main reason I tried these out), let me say that I sincerely can’t believe someone hasn’t thought of this concept years ago! I suffer from eczema so I’ll often get rashes anywhere where skin meets skin and has a tendency to get moist. Well for the first time in 15 years of dealing with eczema these boxer briefs keep my boys separate so I no longer have to worry about that issue!

As you can tell, I can’t say enough good stuff about this product. I myself was skeptical at first so I only bought the smallest amount I could just to try them, but now I’m buying more because I never want to run out of these!

Oh wait... one last thing! Due to the design of the boxer briefs, they tend to make your “frank” look more like a “kielbasa”. My fiancé now calls me “Gonzo”.

For someone who suffers from heat-related skin problems "down there", these Separatec underwear are a Godsend. The are very soft, don't bind up and take good care of Mr. P. and the wrinkled sack where his two sidekicks reside. It's nice have comfortable places for all boys to hang out instead of having them clung to my upper thighs. Mr. P. really seems to enjoy finally having his own room with a trap door for temporary egress when nature calls. I ordered three to check them out and just ordered more.